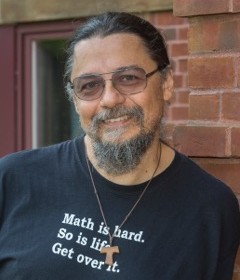 Professor Cruz-Uribe’s research is in harmonic analysis.  He is particularly interested in the study of the classical operators of harmonic analysis—maximal operators, the Hilbert transform and other singular integrals, Riesz potentials/fractional integrals—on weighted and variable exponent Lebesgue spaces.  These kinds of spaces occur naturally in situations where there is a lack of homogeneity in the underlying problem being studied.  He also works on the theory of Rubio de Francia extrapolation, which allows weighted classical norm inequalities to be extended to a variety of function space settings.

Finally, he is interested in the applications of harmonic analysis to the study of partial differential equations, particularly degenerate elliptic equations.