From the March 2016 Desktop News | Scholarships Matter is a series of stories highlighting students in the College of Arts and Sciences who have received and been impacted by scholarships. The student featured in this story is the recipient of three university-wide scholarships and two College-wide scholarships, the Outstanding Junior Award and the Comer Foundation Math Scholarship. Scholarships like these are made possible by generous support from our alumni and friends. 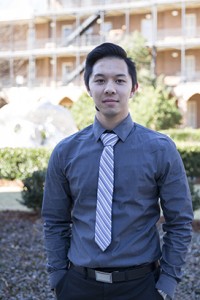 In high school, David Dai finished every math test first—or pretty close to it. He was the salutatorian and president of his senior class, and academia just came easy. But that didn’t mean that paying for college would be as simple.

“My parents shuck oysters for a living,” Dai said. “They usually work from 4 a.m. to 2 p.m., but after the BP oil spill in 2010, their work has been inconsistent at best because of the damage done to the oyster beds.”

Knowing that he couldn’t rely on his parents to send him to school, Dai, a first-generation college student, realized that he would have to find scholarships instead—and he did. Now, as a senior majoring in math, Dai has received five scholarships that enable him to pursue his dreams.

“In my senior year of high school, I actually set the school record for scholarship offers,” Dai said. “It was over $1 million—unfortunately I couldn’t keep it all.”

Despite the fact that Dai’s parents couldn’t help him pay for college, they have spent their whole lives trying to give Dai and his siblings a better life, and for that, Dai wants to give back—to them and to the small fishing community of Bayou La Batre in near Mobile, Alabama, where he grew up.

“I want to go back to my hometown to teach math,” he said. “The community there isn’t the most affluent, but I believe the potential is there, and I just want to give back to that community.”

Specifically, Dai hopes to help the large Asian population in the town. As a son of Vietnamese immigrants, Dai grew up translating for his parents in his home and at school.

“It can be a bit awkward, especially at parent teacher conferences,” he said, “But I feel like I can be a bridge for Asian families in the Mobile County education system.”

While at UA, Dai has volunteered for Habitat for Humanity and the St. Margaret Catholic Church; participated in the Freshman Forum; worked with Relay for Life; and interned with the UA Noyce Scholars Program, which urges STEM majors to consider careers in education. He has also worked over the summer with Tuscaloosa City Schools helping with credit recovery and remedial math.

“It is really rewarding to see students succeed and be able to move on—or in some cases receive that final math credit and finally be able to graduate,” Dai said. “I don’t need them to succeed in upper-level mathematics, but I want them to be able to do the things that will be required of them in their careers.”

The Outstanding Junior Award is given by the College of Arts and Sciences Leadership Board, a group of 200 alumni and friends of the College. The scholarship is awarded to deserving full-time juniors who have outstanding academic and co-curricular accomplishments, uncommon maturity, and an exemplary determination to finish their university education.

Established by the Comer Foundation of Sylacauga, Alabama, the Comer Foundation Math Scholarship supports the education of outstanding students enrolled full-time in the College of Arts and Sciences with a major in mathematics. It is awarded to graduating high-school seniors who are residents of Alabama and who meet eligibility requirements.