From the April 2022 Desktop News |The University of Alabama 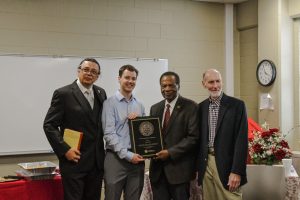 The University of Alabama Department of Mathematics honored one of its most distinguished alumni during this year’s Honors Week with the addition of a new award, the Louis Dale Medal in Mathematics. The medal is awarded to an upper-level mathematics student who displays excellence in their work.

Dr. Louis Dale was part of the Army’s 82nd Airborne Division and received a bachelor’s in mathematics from Miles College before teaching mathematics in Birmingham high schools. He then received his master’s in the same at Atlanta University, which he attended with the support of a National Science Foundation Fellowship for High School Math and Science Teachers. At The University of Alabama, Dale was the first African American Ph.D. student in the math department. He received his degree in 1973, less than twenty years after Autherine Lucy Foster attended her first class on campus.

“He was first in a time when being first was hard,” said Dr. David Cruz-Uribe, chair of UA’s math department. “He was the first in many ways. He has been a trailblazer, and it’s not been easy.”

The Louis Dale Medal sets out to honor this legacy and recognize students whose achievements will make a lasting impact both in mathematics and at the university. This year’s recipient, Troy Roberts, is a fourth-year student majoring in mathematics, as well as in the Accelerated Master’s Program in mathematics.

“Every one of the students who’s going to get this award will be among the best students we’ve ever had,” said Cruz-Uribe. “They’ll go on to have outstanding careers, either in academia or industry. I think they are going to be the kind of people who are going to help boost our program both nationally and internationally. These students are exceptional.”

Each student recognized will receive a medal designed by UA sculptor Katie Adams, as well as a scholarship to help support their studies. To contribute to the Louis Dale Medal in Mathematics fund or any A&S scholarship, visit our website.